Longitudinal evidence has helped track when in life gender differences and social inequalities in physical capability emerge, and how they grow as the population ages.

Health is not just about disease and diagnoses – it’s also about how we feel, how we function and how we adapt to changes in our lives, for example the changes we go through as we age [1]. For most of us, our state of health is affected by our development and experience over the course of our entire lives.

Physical capability, or physical functioning as it is often called, refers to a person’s capacity to undertake the physical tasks of everyday life, such as getting up from a chair, or walking [2]. Looking at differences in people’s physical capability over the course of their lives may be able to help us identify those people who are more likely to achieve a longer and healthier life and maintain their independence and quality of life as they get older.

It is important to remember that longitudinal studies use different types of complementary measures to assess important aspects of physical capability. These include self-reported information and objective assessments, such as grip strength, walking speed, ability to get up from a chair, and standing balance. These objective measures may be more accurate in assessing change over time. They also allow us to identify those both people performing well and those with limitations, and can make it easier to compare findings across studies and generations.

Why is physical capability important?

Poor physical capability in early to mid adulthood may be an indicator of future health. A systematic review of research on this topic found that poorer performance on commonly used objective measures of physical capability (such as grip strength and walking speed) was associated with a higher risk of developing health problems later on in life, including fractures and cognitive decline [3].

Other studies have found that lower physical capability is linked to higher rates of death [4],[5]. Recent findings from the Medical Research Council National Survey of Health and Development

(1946 British birth cohort)[6] looked at people’s performance at age 53 on three measures of physical capability: grip strength, chair rise time and standing balance. They then compared this to death rates between ages 53 to 66.

Women are disproportionally more likely than men to develop disabilities in older age, with longitudinal evidence showing that these differences emerge earlier in life.

A study[1] including more than 3,000 members of the Medical Research Council National Survey of Health and Development (1946 British birth cohort) compared men and women’s self-reported difficulty with day-to-day physical tasks, including walking and climbing stairs at ages 43 and 53.

At age 43, around 5 per cent of women reported that they had problems walking and using stairs due to a long-term health problem. A similar number reported having trouble gripping lids or reaching with their arms. Just over 3 per cent of men reported similar problems.

The cohort members’ socioeconomic position was measured by their fathers’ occupation at age four, and their head of household’s occupation at age 43. Overall, people with lower socioeconomic position at either age deteriorated more quickly than their better-off peers, however the inequalities were greater among women than men. Education provided some protection, but far fewer women than men in this cohort achieved A levels or higher.

When combining findings from several UK cohort studies[2], researchers found gender differences across a range of physical capability measures. Among adults over the age of 50, men tended to perform better on most measures, although differences in walking speed were reduced when controlling for body size. The review found that on most measures, the gender differences narrowed with age, with the exception of walking speed, which appeared to widen.

The social inequalities we experience in early life matter to our physical capability in middle age, but the nature of this relationship can vary across measures.

Analyses of more than 2,900 members of the Medical Research Council National Survey of Health and Development[1],[2],[3] (1946 British birth cohort) found that different measures of socioeconomic position were associated with different measures of physical capability . For example, cohort members whose mothers had little or no education had poorer standing balance at age 53 than those whose mothers were highly educated.

The researchers found no association between childhood socioeconomic position and grip strength at this age.

In both studies, the associations remained even after controlling for a range of factors in both childhood and adulthood, including the cohort members’ own education, occupation and lifestyles.

Researchers compared the cohort members’ performance on a range of objective measures of their physical capability to the occupational class of their head of household at ages 4 and 53. They found that the cohort members’ childhood circumstances were related to their physical capability in their 60s. These associations remained even when controlling for a wide range of other factors, including adult socioeconomic position, occupation and education.

A study[6] which drew together data from different studies around the world found consistent evidence of an association between childhood socioeconomic position and physical capability even into people’s late 60s and 70s. Researchers found that people who grew up in more disadvantaged circumstances performed less well in some tests of physical capability, than their more affluent peers. The association for two measures – walking speed and ability to get up from a chair – remained even when adult socioeconomic position was taken into consideration.

Researchers analysed information on the general health and physical problems of more than 10,000 civil servants, which they compared to the individuals’ employment grade.

People in low-grade posts aged more quickly than their peers in more senior positions. For example, the average physical health of a 45-year-old man in a high-grade post was equivalent to that of a man four and half years younger who had worked in a low-grade job.

By age 70, the average health of a man in a high-grade post was similar to that of a low grade man eight years younger. The differences were similar for women.

Material deprivation can also help identify those at greater risk of physical decline.

Researchers analysed information on more than 3,200 men and women aged 59 to 73 of the Hertfordshire Cohort Study[2]. They compared different measures of the cohort members’ physical

Over half of men who did not own their home and had no access to a car also had poor self-reported physical functioning, compared to just over a tenth of those who were home-owners and had three or more cars available.

These associations remained even after controlling for walking speed, medical history, and other current health conditions, such as heart disease and diabetes. 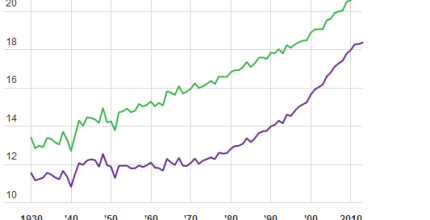