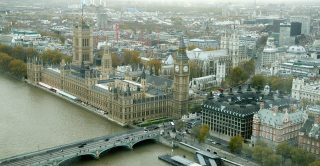 Much has changed since my 2017 blog on engaging with policymakers. Brexit dominating the policy landscape has impacted both international and domestic agendas, often limiting opportunities to get research seen and heard by decision makers. However new developments are starting to take shape, helping to feed more scientific evidence into policy. I explore some of these here, highlighting a few examples of the routes I have taken over the past year.

Along with reams of articles and blogs, there are now a wealth of resources to help you navigate the complex and often confusing world of policy making. A newly created Knowledge Exchange Unit has been set up specifically to help researchers and support knowledge exchange – they act as a bridge between academia and Parliament, highlight calls for evidence and deliver training sessions across the country. Supplementing this is a dedicated webpage detailing how Parliament uses research and the various ways to engage.

More recently, the Universities Policy Engagement Network (UPEN) has formed a network of universities working together to increase the policy impact from their research. UPEN offers a dedicated contact point for policymakers and a collective response to requests for evidence, organises knowledge exchange events and identifies mechanisms to take forward specific projects. UPEN is also developing best practice amongst universities in policy engagement activities, and will act as a champion for this relatively new role within universities.

The arrival of Sir Patrick Vallance as the Government Chief Scientific Adviser has resulted in a renewed focus on advice mechanisms and skills within government, evidence synthesis, and an increase in departmental scientific advisers (CSAs) – most government departments now have a CSA to provide scientific advice to ministers.

Another new development is the Government Areas of Research Interest (a response to Sir Paul Nurse’s review of the UK Research Councils). These ‘living documents’ aim to identify the main research questions facing government departments and are currently being refreshed, with the Department for Work and Pensions leading the field.

The ARIs were set up as a platform for engagement with academia, highlighting the topics government departments are interested in and where more research is needed. They will become increasingly important documents in helping applications to funding bodies by enabling proposals for new research to draw a direct line to specific areas of interest and strengthen the case for the possible impact of research.

Innovations such as sourcing questions via Twitter to inform scrutiny sessions with government ministers signal a new direction for parliamentary select committees. Now in its second round, the ‘My Science Inquiry’, an initiative by the House of Commons Science and Technology Committee, has created an open opportunity for the science community and the wider public to suggest areas for scrutiny. A new inquiry on the effectiveness and influence of the select committee system should surface where more needs to be done.

Responding to calls for evidence by select committees has continued as one of the simplest ways to feed research into parliament. The results of their inquiries are public and many require a response from the government. Open calls for evidence are listed on parliament’s website and grouped by policy area. Some helpful guidance is available on making a submission of written evidence. Previous submissions to inquiries help to see how others have framed their evidence, as committees publish most of the written evidence they receive.

Responding to committee inquiries has been a core focus of CLOSER’s work to raise the profile of longitudinal research, highlighting the value of this form of evidence for a range of policy issues and helping to inform recommendations to government. Supplementing this with blogs transforms the longitudinal evidence into a more accessible format, along with promotion via our Twitter account.

An increasing number of All-Party Parliamentary Groups (APPGs) are conducting inquiries, presenting further opportunities to push research into the policy arena. CLOSER’s response to a recent call for evidence from the APPG on Social Media and Young People emphasised that there is currently not enough evidence to draw definitive conclusions on the long-term impact of social media and screen-use on young people’s mental health and wellbeing. The APPG’s report not only cited our evidence but also called for the government to commission new robust, longitudinal research into social media, mental health and wellbeing, funded by a levy on platforms.

It’s still not clear whether these new developments will help the flow of evidence into policy – many barriers remain and engaging with policy makers can often be a long, arduous and unrewarding activity. However recent moves toward a more systematic and consistent approach signals a step-change in this endeavour and indicates that, whilst more needs to be done, it’s moving in the right direction.