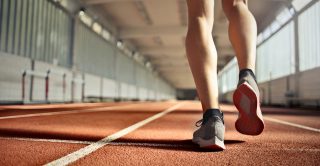 Physical activity is widely considered a key factor to address many prevailing and emerging public health challenges, including the obesity epidemic, the worsening mental health of young people, and population ageing.

In this blog, Dr David Bann discusses the field and recent work from a CLOSER-funded project that has resulted in the creation of a comprehensive guide of the measures used to assess physical activity across six longitudinal studies.

What is physical activity?

Physical activity is usually defined as any bodily movement that results in energy expenditure.

Yes, even typing. Though activities differ markedly in how much energy they are estimated to expend—for example, typing is assigned a metabolic equivalent (MET) intensity level of only 1.5 compared with 10.0 for fast, vigorous effort cycling. For a list of different activities and their MET scores, you can explore this online Compendium of Physical Activities.

We’ve known that physical activity is good for health for decades (perhaps for over 2000 years). So why are people still researching it?

It turns out that links between physical activity and health are complex. Partly because physical activity is not one thing. The type of activity matters: for mental health, imagine the benefit of walking more vs. doing more domestic chores—both may expend the same energy, but have very different effects: for the health of our muscles and bones, weight-bearing activity is particularly important. And there is increasing interest in the idea that light intensity activities such as walking can benefit health—so it’s not just intensive ‘exercises’ that are important.

Another complication is whether links between physical activity and health are causal in nature, or in part because healthy people are inclined to exercise more… and so, science continues to try to find out more.

Assuming it is important for health—as suggested in both observational and experimental research—we also want to know how it is distributed in the population, and why some groups are more active than others. For example, those in disadvantaged social positions (lower income, lower education level etc.) tend to exercise less, and these gaps in physical activity are likely to turn into gaps in future health. Since we seek to reduce such health inequalities, we should seek also to reduce the inequalities in the behaviours which influence health.

We hosted the 2012 Olympics. That was fun and inspiring, didn’t that ‘work’—i.e. make us all active?

Seemingly not. It’s overall unclear whether investment in elite sports has wider benefits in this way (see further information below). Changing behaviour is complex and challenging. Overall, vast sections of society are considered to be physically inactive. For instance, the 2016 Health Survey for England study showed that only 66% of men and 58% of women met the aerobic physical activity guidelines. This is a global problem which is not unique to the UK.

How does your CLOSER-funded work fit into all this?

That was quite the segue. Dr Meg Fluharty, myself and a team of others have:

Ok good. Did you derive and provide harmonised variables?

Although we set out to harmonise physical activity variables across the studies, we found this was not possible across the multiple studies and domains of activity considered—the different studies have all used different physical activity measures. So instead, we focused on accurately documenting what was collected, and we highlighted measures which appear similar. This will help avoid ‘duplication of effort’ —researchers won’t need to start from scratch when conducting cross-study research on physical activity in these studies. Our report will provide a starting point on which to build.

Why didn’t the studies use the same measures?!

Imagine you deciding what to include next in one of these studies—the hands of scientific history weigh heavily on your shoulders.

You have to weigh up ‘within-cohort comparability’—that is, using the same measures as used previously in each study. Perhaps the measures have been used for many decades—across many hundreds of scientific papers—changing to use other measures would likely cause problems for future scientists trying to use the data. And so, you might choose to keep the measures the same. That said, there may be cases where the value of changing the measure outweighs the value of keeping it the same. And so, they may change both within and across studies. This is aside from a myriad of other complications, such as multiple competing demands, and how academia values and resources contributing to scientific resources.

Should we just transition to using accelerometers?

What is on the horizon in physical activity research? How can longitudinal studies contribute?

Longitudinal studies are likely to be helpful in answering the many important and unanswered questions in the field, such as:

Physical activity researchers are increasingly grappling with the complexities of the field. Firstly, in terms of measurement. For example, initial studies used simple cut-points to separate out different intensities of activity, and then consider them separately. They are now increasingly taking advantage of all of the variation in activity, and considering that time itself is limited (so time spent doing something is at the expense of something else – ‘isotemporal substitution’). From measuring activity using devices such as accelerometers, which are worn for short periods of time, it is increasingly possible to measure it passively using smartphones over long periods of time.

And as the ‘causal revolution’ has taken place in science, it is also influencing physical activity research. So we are moving from assuming that an association between physical activity and health is causal, to now probing the assumptions required to make causal inference—and using different study designs to try to understand this.

So, a promising future then?

David Bann researches population health (Epidemiology) and is broadly interested in how society (and its change) influences the different dimensions of health. He is Associate Professor of Population Health at UCL. View David’s Academic Profile and follow him on Twitter: @davidabann