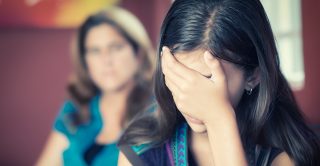 10 year olds who frequently argue with their mother are significantly more likely to develop mental health problems by the time they are 14, a new report from The Children’s Society and Barnardo’s has found.

Half of all mental health problems start by age 14 and the charities wanted to find out which of the issues affecting children about to move up to secondary school were most strongly linked to mental ill health later on.

Using data from the Understanding Society, researchers analysed answers from the youth survey of 10 to 15-year-olds. The youth questionnaire is self-completed, with consent from both the children and their parents.

The research found more than 12,000 children who argued with their mother ‘most days’ or said they didn’t feel supported by their family were four times more likely to have mental health problems, such as depression or anxiety, by the time they were 14-15 years old. Around 1 in 10 (11%) UK children aged 10-11 habitually argue with their mother and 1 in 6 (17%) don’t feel supported by their family in most aspects of their life.

Although less than 1 in 20 (4%) of 10-11 year old children are bullied a few times each week, the impact is stark: they are 19 times more likely to have mental health problems by the time they are 14, than those who aren’t bullied.

Matthew Reed, Chief Executive of The Children’s Society, said: “The relationships that children have with their family, their peers at school and how they view themselves are cornerstones of their future mental health. These findings reveal just how important it is to spot children’s problems at home, at school and with self-esteem early on and make sure that children and their families get the right support as they make the move up to secondary school.”