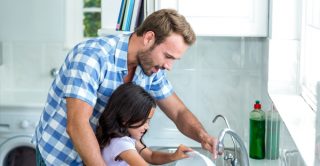 What parents do, as well as what they say matters a great deal when it comes to children forming opinions about gender roles later on in life, says new research which uses longitudinal data from Understanding Society and its predecessor the British Household Panel Survey (BHPS).

The research published in the European Sociological Review discovered whether saying or doing makes more of an impact when it comes to shaping children’s attitudes to gender roles. For example, if a child saw their father doing the housework at home, are they are more likely to form a better attitude towards gender equality later in adulthood?

The team from the London School of Economics used data from Understanding Society and its predecessor, the British Household Panel Survey and focused on British children aged between 11 and 15. All Understanding Society participants aged 10-15 fill in a multi-topic paper questionnaire every year.

The main sample comprised of 2,859 children (1,387 girls and 1,472 boys) who were both living in couple parent families. However, for completeness, the study also repeated the analysis with 897 young people living in lone-mother families since single-parent (overwhelmingly lone mother) families are likely to have a rather different influence on their children’s attitudes in the absence of a father.

Why was longitudinal data needed for this study?

“We confirmed that attitudes formed in childhood, summarised using prospective measures that are not confounded by adaptation to partnership or labour market context, do persist into adult life and have measurable consequences for behaviours. We have thus shown how intergenerational transmission of spoken and enacted gender roles has the potential to impact gender relations in adults’ lives and is likely to be part of the cause of persistent inequalities in paid and unpaid work. Following sons and daughters further into adulthood and identifying the pathways for both the retention and adaptation of gender-role attitudes will be a valuable future extension of these findings.” said Professor Lucinda Platt from the London School of Economics.

‘Saying and Doing Gender: Intergenerational Transmission of Attitudes towards the Sexual Division of Labour’ by Lucinda Platt and Javier Polavieja was published in the European Sociological Review in August 2016.