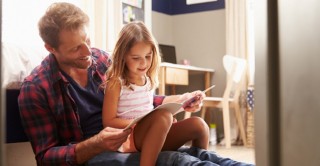 A UCL-led lifelong study of people in England, Scotland and Wales has found that those whose parents were more caring and less controlling during their childhood were likely to be happier and more satisfied throughout their lives.

Care from both mother and father were found to be equally important predictors of participants’ mental wellbeing through to middle age, although paternal care had a greater association with wellbeing in later life (age 60-64).

People whose parents exerted greater psychological control during childhood had significantly lower mental wellbeing during adulthood than those with less controlling parents, with an effect size similar to the recent death of a close friend or relative.

The study monitored the mental wellbeing of participants in the in MRC National Survey of Health and Development between the ages of 13 and 64. The survey tracked 5,362 people since their birth in 1946, of whom 2,800 remain under active follow-up. 3,699 participants had complete wellbeing data at ages 13-15, falling to approximately 2,000 by ages 60-64.

Published in The Journal of Positive Psychology, the research highlights how parenting can have long-term positive impacts on wellbeing that continue through to older age. The results were controlled for confounding variables including parental separation, childhood social class, maternal mental health and participants’ personality traits.

“We found that people whose parents showed warmth and responsiveness had higher life satisfaction and better mental wellbeing throughout early, middle and late adulthood,” explains lead author Dr Mai Stafford from the MRC Unit for Lifelong Health & Ageing at UCL. “By contrast, psychological control was significantly associated with lower life satisfaction and mental wellbeing. Examples of psychological control include not allowing children to make their own decisions, invading their privacy and fostering dependence.”

“We know from other studies that if a child shares a secure emotional attachment with their parents, they are better able to form secure attachments in adult life,” explains Dr Stafford. “Parents also give us a stable base from which to explore the world, while warmth and responsiveness has been shown to promote social and emotional development. By contrast, psychological control can limit a child’s independence and leave them less able to regulate their own behaviour.

UCL was founded in 1826. We were the first English university established after Oxford and Cambridge, the first to open up university education to those previously excluded from it, and the first to provide systematic teaching of law, architecture and medicine. We are among the world’s top universities, as reflected by performance in a range of international rankings and tables. UCL currently has over 35,000 students from 150 countries and over 11,000 staff. Our annual income is more than £1 billion.