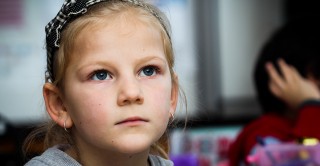 Children whose parents are from poorer backgrounds are more likely to have diagnosable mental health problems, according to new research from the UCL Institute of Education and Centre for Mental Health.

Mental health findings from the Millennium Cohort Study (MCS) looks at the mental health of 11-year-old children living in the UK. It shows that about one in ten (10.3 per cent) 11-year-olds in the UK has a mental health problem according to parents – or 8 per cent as reported by teachers, with symptoms including hyperactivity, conduct problems and peerproblems as well as emotional problems.

The report finds that children from low income households are four times more likely than those with the highest incomes to have mental health problems. It also suggests that not living with both natural parents is associated with mental health problems in children. Geography too has an impact – 11-year-olds in Scotland have a significantly lower prevalence of hyperactivity and peer problems than those in the rest of the UK.

The research was highlighted at an event, ‘Childhood mental health and social-emotional skills: new findings and policy implications’, as part of the annual Economic and Social Research Council’s (ESRC) Festival of Social Science.

“Socio-economic differences are clearly a factor in mental health among children,” says Dr Leslie Gutman, Research Director at the IOE. “There is also some evidence to suggest that this link between mental health and income has become more pronounced in recent years, and has more of an impact on children than on adults.” In order to investigate these issues, Dr Gutman and her colleagues are conducting an ESRC-funded study focusing on the incidence and prevalence of mental health problems among children, as identified by the MCS in 2012.

The MCS is a longitudinal study following a large sample of children born in the UK at the start of the 21st century. It measures children’s mental health using a questionnaire based on reports from parents and teachers in the previous six months. This questionnaire distinguishes between conduct problems, hyperactivity and inattention, emotional problems and peer problems.

To assess trends over time, Dr Gutman and her team made comparisons with children of the same age in the 1999 and 2004 British Child and Adolescent Mental Health Surveys. Analyses were also carried out on how factors such as ethnicity and socio-economic background were associated with children’s mental health.

The research also highlights that ethnicity is an issue, with white boys more likely to suffer from hyperactivity and conduct problems than other groups. For girls, children of mixed ethnic background were most at-risk of experiencing these problems.

The study also found differences between parents and teachers on perceptions of several mental health problems in children. Reports by teachers suggest, for example, that hyperactivity among girls improved from 1999 to 2012, whereas those by parents indicate that they have been getting worse since 2004.

Centre for Mental Health chief executive Prof Sean Duggan said: “Mental health problems affect one in five children at some point between the ages of 3 and 11 and they cast a long shadow over a child’s life chances. Early starting behavioural problems are associated with especially high levels of disadvantage. Today’s findings point to the urgent need to support children’s mental health early in life and to the vital role of primary schools in promoting good mental health and responding to children and parents who need help.”

In the remaining two years of their project, the researchers will examine children’s trajectories of mental health problems, along with their causes and consequences.

The research findings will be discussed at the conference in London on Wednesday 11 November and is invitation only. The event is being hosted by the Early Intervention Foundation as part of the ESRC’s flagship annual Festival of Social Science. Carey Oppenheim, Early Intervention Foundation Chief Executive, said: “Many of the children and young people suffering from mental health problems might have had a different journey if they or their family had received the right help at an earlier time.

“Every child deserves the best opportunity to realise their full potential and we know that those with well-developed social and emotional skills have a better chance of being happy and healthy adults. That is why it is so important to tackle the inequalities that exist in these vital skills between children from different backgrounds.

“It is vital that the early signs of risk are picked up by all those across the public sector working closely with children and young people. This will allow them to work better together to use effective and timely early intervention to tackle the underlying causes to stop problems worsening and having damaging effects.”

This news item has been reposted from the Centre for Mental Health website. For more information and the full report, click here.