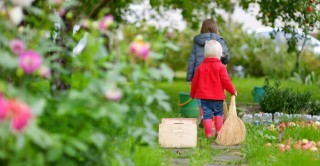 The research, led by a team based in the Netherlands, analysed information on 6467 children born in the UK in the year 2000-01, who are participating in the Millennium Cohort Study.

Researchers found that even when taking into account factors such as parents’ influence, food consumption, physical activity, education and poverty, not having a garden was a major risk factor in piling on weight.

Children from lower-educated households with with no access to a garden at ages three and five were at 38% increased risk of becoming overweight or obese by age seven.

Similarly, children from higher-educated househoulds living in disadvantaged neighourhoods, who lacked access to a garden, were also 38 per cent more likely to become overweight or obese by age seven.

The study authors pointed out that overweight and obese children and adolescents are at increased risk of developing various health problems such as type 2 diabetes, and are more likely to become obese adults.

Around 30 per cent of children in England are now overweight or obese.

Annemarie Schalkwijk, VU University Medical Centre, the Netherlands, said: “We showed that limits on access to outdoors space is associated with future childhood overweight/obesity – although moderated by education level. More research is needed to see how we can deploy these findings in the prevention of type 2 diabetes.

The study authors are planning further research on the environmental influence on the risk of becoming overweight or obese.

The study was presented at the 2015 annual meeting of the European Association for the Study of Diabetes (EASD) in Stockholm. The research is led by Annemarie Schalkwijk, VU University Medical Centre, Amsterdam, the Netherlands.

The Millennium Cohort Study (MCS) is a multi-disciplinary research project following the lives of around 19,000 children born in the UK in 2000-01.