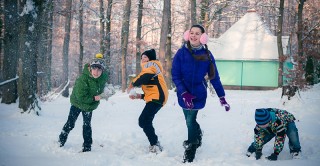 Children are not active enough in the autumn and winter months, and spend too much time sitting indoors compared to other times of the year.

According to researchers from the Medical Research Council (MRC) Epidemiology Unit and Centre for Diet and Activity Research (CEDAR) at the University of Cambridge, children were most active during weekends in early summer, and least active during the weekends in winter.

The study’s authors used data from the Millennium Cohort Study (MCS), which measured the physical activity levels of more than 700 seven-year-old children using accelerometers over the course of a calendar year.

The research suggested that boys’ activity levels changed more than girls’ throughout the year, but remained higher than girls’ at all times. On average, boys achieved the recommended minimum activity even during winter, whereas girls only tended to reach recommended levels during the summer.

“Physical activity is important for children’s health and development, but many do not get enough exercise,” says Dr Andrew Atkin, from CEDAR. “During spring and summer, when the weather is better and the days are longer, they tend to be playing out and are more active, but during the darker, colder months, they are much less so.”

UK public health guidelines advise that children should participate in at least one hour of physical activity a day. This could include brisk walking, running, sports or exercise. Children should also minimise the amount of time they spend sitting for extended periods.

The team argues that the findings provide further support for initiatives aimed at encouraging physical activity amongst children during winter, especially on the weekends.

“Children need to be given more opportunities to be active, particularly during the winter months and when the weather is bad,” explains Dr Esther van Sluijs, also from CEDAR. “This might include better access to indoor spaces where children can be active or through schools changing their policies related to the use of indoor and outdoor spaces during bad weather.”

‘Seasonal Variation in Children’s Physical Activity and Sedentary Time’ by Atkin, AJ et al. is published in the Journal of Medicine & Science in Sports & Exercise