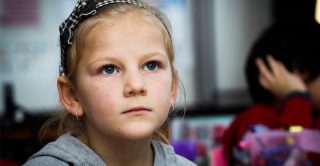 Children with a genetic risk of developing schizophrenia later in life have been found to have lower IQs, language difficulties, and to be more irritable and headstrong.

Those with the strongest risk of developing schizophrenia were 12 to 26 per cent more likely than their peers to experience these childhood developmental problems.

Researchers from Cardiff University and King’s College London found genetic patterns associated with schizophrenia were linked with scores in various tests of mood, behaviour, sociability and aspects of IQ, assessed between ages 7 and 9. Some behavioural and communications difficulties showed up as early as 4 years old. The links between these developmental problems and genetic risk for schizophrenia remained even when taking social class and gender into account.

The research drew on data from the Avon Longitudinal Study of Parents and Children (ALSPAC), which is following some 14,000 families in the Bristol area, with children born between 1991 and 1992. ALSPAC collected genetic data on 8,365 children and has psychological and related test data on between 5,100 and 6,952 children, depending on the measures.

The researchers, supported by the Medical Research Council, identified those with a genetic risk of schizophrenia. The mental disorder, which usually emerges in early adulthood, is often inherited and there are well-established tests to indicate risk.

The researchers found that the genetic risk of schizophrenia may show up early in the behaviour and functioning of young children. This opens the way to better informed counselling and psychiatric practice. Behavioural problems are often thought to be caused by a child’s environment, they say, but may have to do with genetic liability to adult mental disorders.

The researchers do note, however, that most children with emotional and behavioural issues do not go on to develop mental disorders and further work is needed on how likely such children are to develop schizophrenia.

‘Schizophrenia risk alleles are associated with neurodevelopmental outcomes in childhood’ by Prof Anita Thapar et al. was published in The Lancet in December 2016.