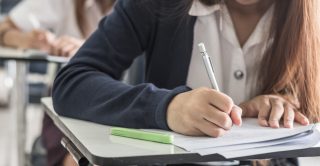 A new examination of the role of children’s genomes in their education progress reveals their impact on both school league tables and how teacher performance is assessed.

A team led by University of Bristol researchers used data from 6,518 participants of the Children of the 90s longitudinal study alongside the UK National Pupil Database of exam results. As people’s genes do not change over time, they wanted to know if value added progress measures only reflect school and teacher performance or also genetic differences between students.

Since 2002 value-added measures of the progress students make in each period at school, such as between entering secondary school at age 11 and taking GCSE’s at age 16, have been used to assess how well a school and its teachers are performing.

Value-added statistics consider pupil intake and prior ability in an attempt to provide unbiased indicators of school and teacher performance. Because school league tables are built from these statistics, they are assumed to be accurate and provide a fair reflection of the performance of schools and teachers. This research highlights that value-added measures and the resulting school league tables are biased and may unfairly penalise some schools.

“These findings suggest that value-added progress measures should be used with caution as they may misattribute pre-existing differences in children’s ability to schools and teachers. School league tables may over or understate the effectiveness of schools depending on their intake, and teachers may be unjustly penalised based on their luck of the draw regarding the class they are given.

“Thanks to the wealth of data available through the Children of the 90s study we were able to conduct this work. The next steps should be to look at how the genetic differences we observe may be expressed, for example through attitude to work or behaviour.”

Policy Bristol have produced a briefing paper for educationalists on the issues raised which can be found at http://www.bristol.ac.uk/policybristol/policy-briefings/

Tim Morris and Neil Davies have written a blog for the British Educational Research Journal which can be found from Monday 10 September: https://www.bera.ac.uk/blog/do-value-added-measures-of-school-and-teacher-performance-reflect-genetic-differences-between-students

Based at the University of Bristol, Children of the 90s, also known as the Avon Longitudinal Study of Parents and Children (ALSPAC), is a long-term health-research project that enrolled more than 14,000 pregnant women in 1991 and 1992. It has been following the health and development of the parents and their children in detail ever since and is currently recruiting the children and the siblings of the original children into the study. It receives core funding from the Medical Research Council, the Wellcome Trust and the University of Bristol. Find out more at www.childrenofthe90s.ac.uk.