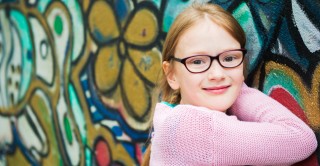 Contrary to popular belief, dyslexic children don’t have problems with their sight, according to new findings from ALSPAC.

Dyslexia affects around 375,000 UK children and has a lifelong impact on learning.

There is widespread belief in the scientific community that dyslexia is not caused by sight problems. On the other hand, many practitioners offer dyslexic children eye treatments and therapies. Professional bodies recommend a routine eye check to make sure that glasses are offered if necessary and then that no further testing is needed.

Systematic reviews of the evidence for vision-based dyslexia treatments conclude that there are no robust data to support them and that most of the available studies – until now – are based only on small numbers of children. This makes it hard for families to know what is best for their dyslexic child.

In the first study of its kind, researchers at the universities of Bristol and Newcastle looked at the results of comprehensive eye tests in 5,822 participants in Children of the 90s, a large population-based study in the southwest of England. Of these children, 172 (3%) had severe dyslexia and 479 (8%) had moderate dyslexia.

The researchers compared the test results of the children with severe dyslexia with the other 5,650 children of the same age in Children of the 90s who didn’t have dyslexia.

The vision tests – which included moving both eyes and combining information from both eyes – were conducted when the children were aged between seven and nine (between 1998 and 2001).

“These population-based results give the “bigger picture” and show us that vision problems are rare in dyslexic children. The few vision impairments we did see in the dyslexic children also occurred in their non-dyslexic classmates.

Some practitioners feel that vision impairments may be associated with dyslexia and should be treated. However, our study results show that the majority of dyslexic children have entirely normal vision on the tests we used.

So, families now might want to ask: what visual impairment is actually being treated, how it is measured and what is the evidence that treating it will help a child with dyslexia? This will help them decide whether any sight treatment offered is likely to help their child’s dyslexia”.

Dr Alexandra Creavin, one of the co-authors from the University of Bristol’s School of Social and Community Medicine, said:

“Our findings may reassure families that their child’s sight is very unlikely to be affecting their reading ability (assuming the need for glasses has been ruled out) and so they can pursue other options for supporting their child.

Fortunately there are treatments and training programmes to help children with dyslexia that do have a good evidence base, including training in phonics (speech sounds).

We hope national bodies like NICE in the UK will produce evidence-based guidelines for the management of children with dyslexia and that charities and support groups will signpost families to the best sources of support for their children and present a balanced view of all the evidence.”

‘Ophthalmic Abnormalities and Reading Impairment’ by Alexandra Creavin, Raghu Lingam, Colin Steer and Cathy Williams is published in Pediatrics, the official journal of the American Academy of Pediatrics (AAP), in May 2015.