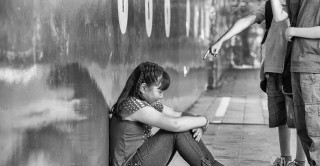 Bullying in teenage years is strongly associated with depression later on in life, suggests new research published in The British Medical Journal (BMJ) this week.

Depression is a major public health problem with high economic and societal costs. There is a rapid increase in depression from childhood to adulthood and one contributing factor could be bullying by peers. But the link between bullying at school and depression in adulthood is still unclear due to limitations in previous research.

So a team of scientists, led by Lucy Bowes at the University of Oxford, carried out one of the largest studies on the association between bullying by peers in teenage years and depression in early adulthood.

They undertook a longitudinal observational study that examined the relationship between bullying at 13 years and depression at 18 years.

They analysed bullying and depression data on 3,898 participants in the Avon Longitudinal Study of Parents and Children (ALSPAC), a UK community based birth cohort.

The participants completed a self-report questionnaire at 13 years about bullying and at 18 years completed an assessment that identified individuals who met internationally agreed criteria for depressive illness.

Only 5.5% of teenagers who did not experience bullying were depressed at 18 years.

Around 10.1% of frequently bullied teenagers experienced depression for more than two years, compared with 4.1% from the non-bullied group.

Overall, 2668 participants had data on bullying and depression as well as other factors that may have caused depression such as previous bullying in childhood, mental and behavioral problems, family set up and stressful life events.

When these factors were taken into account, frequently bullied teenagers still had around a twofold increase in odds of depression compared with those who did not experience bullying. This association was the same for both males and females.

The most common type of bullying was name calling – 36% experienced this, while 23% had belongings taken.

If this were a causal relationship up to 30% of depression in early adulthood could be attributable to bullying in teenage years, explain the authors, adding that bullying could make a substantial contribution to the overall burden of depression.

While this is an observational study and no definitive conclusions can be drawn about cause and effect, they say that interventions to reduce bullying in schools could reduce depression in later life.

In an accompanying editorial, Maria M Ttofi from the University of Cambridge writes that this study has clear anti bullying messages that should be endorsed by parents, schools and practitioners. She also calls for more research to establish the causal links between bullying and depression, and to drive specific interventions to reduce victimisation.

Peer victimisation during adolescence and its impact on depression in early adulthood: prospective cohort study in the United Kingdom by Lucy Bowes (June, 2015) is published by the BMJ.