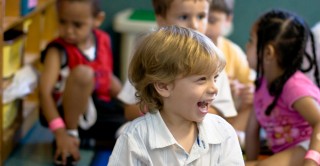 Should all children be allowed to delay their entry to school, or should that option only be available to those born in the summer?

This question kicked off a special session of the Education Select Committee held at the House of Commons today (March 4). Expert witnesses Tammy Campbell, of the UCL Institute of Education, and Claire Crawford, of the Institute for Fiscal Studies (IFS), responded by presenting the findings of research using several British longitudinal studies.

Children born in August are nearly a year younger that their September-born classmates – a marked difference for four and five year olds when starting school. But summer-born children are not the only ones who can be disadvantaged, as Claire Crawford explained: “For every month that a child is younger than his or her classmates born in September, there is a small penalty associated with that.”

Tammy Campbell noted that there is more than one driver of the so-called ‘month of birth’ effect. Her research using the Millennium Cohort Study has shown that primary school pupils are being grouped by ability as young as age seven. “Summer-born pupils are disproportionately placed in lower ability groups, and this disadvantages them throughout much of their schooling,” she explained.

Previous research has shown that young children who are placed in lower sets or streams rarely move to higher ability groups over the course of their primary education.

Summer-born pupils are also more likely to be diagnosed with special educational needs (SEN). “This wouldn’t necessarily be a problem, if the SEN label meant that children received better support and weren’t stereotyped. However, my research has shown that an SEN label can have a negative effect,” Tammy Campbell said.

Longitudinal studies have shown that not only do summer-born pupils have lower educational attainment than children born in the autumn, but they also tend to have lower self-worth and poorer wellbeing.

Researchers at IFS analysed information from the Millennium Cohort Study, the Avon Longitudinal Study of Parents and Children, and Next Steps (previously known as the Longitudinal Study of Young People in England). They found that summer-born pupils were more likely than their autumn-born classmates not to believe in their own ability or think that they have control over their lives. They were also more likely to be unhappy at school and to be bullied.

“You will never be able to get around the fact that someone in the class has to be the youngest, but there are things we can do to reduce the disadvantage,” Claire Crawford said.

IFS researchers believe that the key issue is the age at which pupils take standardised tests, rather than the age they start school. Younger children end up doing worse than their peers on these assessments, which can cause them to lose confidence in their ability. They recommend adjusting test scores based on the child’s age.

However, Tammy Campbell noted that adjusting for age “isn’t a panacea.” For example, it would not change the non-academic challenges faced by summer-born pupils.

She argued that the solution lies with the curriculum, and noted that formal education begins in reception. For example, four-year-olds are taught phonics, even though their verbal skills are not sufficiently developed to make the sounds expected of them.

“There is a push – which is not necessarily evidence-based – to educate formally as early as possible. We need to compare what’s actually happening in reception classes to what’s developmentally appropriate for young children,” Tammy Campbell said. “The issue is more around when formal learning begins. There’s a big difference between starting play-based learning at age four, and being asked to do phonics, maths and writing.”

She also noted that sources like the Millennium Cohort Study – which hold rich evidence on pregnancy, birth and education – could be used to explore the disadvantages faced by premature children. “This is certainly an area we need to understand better. Existing evidence suggests that premature, summer-born children would be doubly disadvantaged” she said.

About the Education Select Committee inquiry

The Committee is looking into the Department for Education’s (DfE) use of evidence in their policies on when children should start school, including those born in the summer or prematurely. Experts were invited to respond to a DfE memorandum on the subject through an online web forum. Find out more on the Parliament website.

Written evidence submitted to the Select Committee can be read on the web form for summer born children.

Does when you are born matter? The impact of month of birth on children’s cognitive and non-cognitive skills in England by Claire Crawford, Lorraine Dearden and Ellen Greaves was published by the Institute for Fiscal Studies in November 2011.

Stereotyped at seven? Biases in teacher judgements of pupils’ ability and attainment by Tammy Campbell was published in the Centre for Longitudinal Studies’ working paper series in September 2013.

In-school ability grouping and the month of birth effect: Preliminary evidence from the Millennium Cohort Study by Tammy Campbell was published in the Centre for Longitudinal Studies’ working paper series in March 2013.