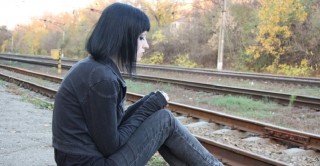 Young people who identify with the goth subculture might be at increased risk of depression and self-harm, according to new research published in the Lancet Psychiatry journal.

Researchers from the University of Oxford and the University of Bristol looked at information from thousands of young participants taking part in the Avon Longitudinal Study of Parents and Children to investigate whether identifying with the goth subculture at age 15 is linked with depression and self-harm in early adulthood.

Lead author, Dr Lucy Bowes, University of Oxford, said: “Our study does not show that being a goth causes depression or self-harm, but rather that some young goths are more vulnerable to developing these conditions.”

Researchers analysed data from 3,694 teenagers who provided information on self-harm and depressive mood at ages 15 and 18. The participants were asked the extent to which they identified as a goth, and whether they also identified with a variety of other youth subcultures (ie, ‘sporty’, ‘populars’, ‘skaters’, ‘chavs’, ‘loners’, ‘keeners’, and ‘bimbos’).

The researchers found that the more young people identified with the goth subculture, the higher their likelihood of self-harm and depression.

Although some other subcultures – such as ‘skaters’ and ‘loners’ – were also associated with adult depression and self-harm, the associated was strongest for goths. Young people who self-identified as ‘sporty’ were least likely to have depression or self-harm at age 18.

Depression and self-harm are common among teenagers with up to one in five 15-year-olds in England saying they self-harm. Contemporary goth youth subculture has been linked with deliberate self-harm, but until now whether this association is confounded by the characteristics of young people, their families, or their circumstances was unclear.

Researchers pointed out that the findings cannot be used to claim that becoming a goth causes an increased risk of self-harm and depression. They speculate that the goth subculture could provide an important source of validation and a community within which young people who do not conform with societal norms can be understood.

Study co-author, Dr Rebecca Pearson, University of Bristol, said: “Teenagers who are susceptible to depression or have a tendency to self-harm might be attracted to the goth subculture which is known to embrace marginalised individuals from all backgrounds, including those with mental health problems.

The study authors conclude that more work needs to be done to support young people in the goth community, and to identify those at risk of depression and self-harm.

Based at the University of Bristol, Children of the 90s, also known as the Avon Longitudinal Study of Parents and Children (ALSPAC), is a long-term health-research project that enrolled more than 14,000 pregnant women in 1991 and 1992. It has been following the health and development of the parents and their children in detail ever since and is currently recruiting the children and the siblings of the original children into the study. It receives core funding from the Medical Research Council, the Wellcome Trust and the University of Bristol.

The paper, ‘Risk of depression and self-harm in teenagers identifying with goth subculture: a longitudinal cohort study’, by Lucy Bowes et al is published in The Lancet Psychiatry (August 2015).