Home  >  News  >  Impaired vision has increased for generations of teenagers since the 1960s, new study finds 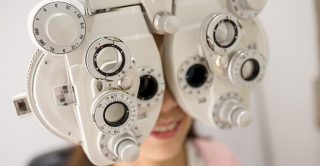 Young people growing up in the 1970s and 1980s reached their mid-teens at greater risk of poor visual health compared to those who were raised in the 1960s.

Funded by CLOSER, researchers from the UCL Institute of Child Health, tracked the visual function of more than 14,000 British adolescents born in 1946, 1958 and 1970.

The research team, led by Professor Jugnoo Rahi, compared measures of eyesight across three national birth cohorts to examine how visual function and ophthalmic disorders have changed over time, and whether they are associated with social position and gender.

Across all generations, teenagers from less privileged homes were at greater risk of experiencing sight problems compared to those from advantaged backgrounds.

The findings also revealed that girls were more likely to suffer from impaired vision, and had greater odds of suffering from severe visual impairment and blindness than boys. This gender gap has widened over time.

Professor Rahi said: “Our analysis of data from three birth cohorts spanning 25 years suggests that disadvantaged social position at birth and during childhood were each associated with impaired visual function alongside, and independent of, ethnic minority status and being female.

“Since these associations with childhood circumstances are also evident in populations of older adults now, we think that these early life factors influence visual function throughout life. The value of our study lies in identifying a historical springboard from which subsequent visual health inequalities in childhood are likely to have emerged and possibly continued into adulthood.

“As the impact of impaired vision during childhood is felt across the lifecourse, with the restricted educational, occupational and social opportunities, or costs of medical and social care, we urge that early years should not be overlooked in emerging national ophthalmic public health policies and services tackling inequalities in adults. For example, efforts should be made to ensure that the advocated programme of vision screening at school entry (age 4 to 5 years) is comprehensively implemented in the UK.”

1.    This research was carried out as part of CLOSER (Cohort and Longitudinal Studies Enhancement Resources). CLOSER aims to maximise the use, value and impact of the UK’s longitudinal studies. Bringing together eight leading studies, the British Library and the UK Data Service, CLOSER works to stimulate interdisciplinary research, develop shared resources, provide training, and share expertise. CLOSER is funded by the Economic and Social Research Council and the Medical Research Council. Its lead research partner is the UCL Institute of Education. www.closer.ac.uk

2.    As part of the research, Professor Rahi ‘harmonised’ measures of visual function, recoding data from three national cohorts so information on visual health could be compared over the decades. Read more about data harmonisation.

3.    The Medical Research Council (MRC) National Survey of Health and Development (NSHD) is the oldest and longest running of the British birth cohort studies. It follows more than 5,000 men and women born in England, Scotland or Wales in March 1946. http://www.nshd.mrc.ac.uk/

5.    BCS70 is following the lives of more than 17,000 people born in England, Scotland and Wales in a single week of 1970. Since the birth survey in 1970, there have been eight further surveys of all cohort members at ages 5, 10, 16, 26, 30, 34, 38 and 42. The age 46 survey is taking place in 2016. Over the course of cohort members’ lives, BCS70 has collected information on health, physical, educational and social development, and economic circumstances, among other factors. The study is funded by the Economic and Social Research Council and managed by the Centre for Longitudinal Studies at the Department of Social Science, UCL Institute of Education. Further information is available at www.cls.ioe.ac.uk/bcs70

6.    The Economic and Social Research Council (ESRC) is the UK’s largest funder of research on the social and economic questions facing us today. It supports the development and training of the UK’s future social scientists and also funds major studies that provide the infrastructure for research. ESRC-funded research informs policymakers and practitioners and helps make businesses, voluntary bodies and other organisations more effective. The ESRC also works collaboratively with six other UK research councils and Innovate UK to fund cross-disciplinary research and innovation addressing major societal challenges. The ESRC is an independent organisation, established by Royal Charter in 1965, and funded mainly by the Government. www.esrc.ac.uk

7.    The UCL Institute of Education is a world-leader specialising in education and the social sciences. Founded in 1902, the Institute currently has more than 7,000 students and 800 staff. In the 2014 and 2015 QS World University Rankings, the Institute was ranked number one for education worldwide. It was shortlisted in the ‘University of the Year’ category of the 2014 Times Higher Education (THE) awards. In January 2014, the Institute was recognised by Ofsted for its ‘outstanding’ initial teacher training across primary, secondary and further education. In the most recent Research Excellence Framework, 94 per cent of its research was judged to be world class. On 2 December 2014, the Institute became a single-faculty school of UCL, called the UCL Institute of Education. www.ucl.ac.uk/ioe  | Follow @IOE_London

8.    University College London (UCL) was founded in 1826. It was the first English university established after Oxford and Cambridge, the first to open up university education to those previously excluded from it, and the first to provide systematic teaching of law, architecture and medicine. It is among the world’s top universities, as reflected by performance in a range of international rankings and tables. UCL currently has over 35,000 students from 150 countries and over 11,000 staff. Its annual income is more than £1 billion. www.ucl.ac.uk | Follow @uclnews | Watch www.YouTube.com/UCLTV