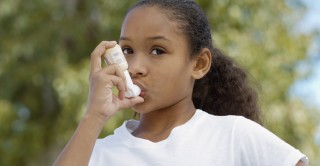 Babies who gain weight rapidly in the first three months of life are more likely to develop asthma and for it to persist into adolescence.

This is according to the latest research from the Avon Longitudinal Study of Parents and Children, which analysed information on height, weight and asthma symptoms in almost 10,000 people in the study at various points in time from birth to age 17.

Although many factors are associated with an increased risk of asthma, the cause of asthma is still not known. It is now widely accepted that events in early childhood could be critical for asthma development: rate of foetal growth and low birth weight have both been associated with asthma.

“It is clear from our research that there is a connection between babies gaining weight quickly in the first three months of life and the risk of them developing asthma later on. We are not sure exactly what causes this but it may be that rapid weight gain leads to abnormal development of the lungs or the immune system. Further studies will be required to confirm these findings.

We would recommend that GPs check a child’s personal growth curve if they come to them with asthma-related symptoms and take this into account in their decision to start medication.”

“Asthma is a complex condition, affecting 1 in 11 people in the UK, yet years of research underfunding means it still remains a relative mystery. The relationship between birth weight and the development of asthma is unclear; while these new findings show that babies who gain weight quickly in the first three months of life may be at increased risk of developing asthma, it has also been recognised previously that babies born with a low birth weight are more likely to develop asthma later on in childhood.

More research is needed to get a clearer picture of the connection between a baby’s weight and their likelihood of developing asthma in later life.”

‘Influence of childhood growth on asthma and lung function in adolescence’ by A.M.M. Sonnenschein-van der Voort et al. was published in the Journal of Allergy and Clinical Immunology on 7 January 2015.