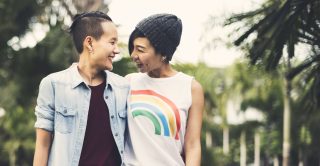 A study of the mental health of the LGB population has found that people who identified as gay, lesbian or bisexual experienced poorer mental health than heterosexual people. The research highlights the inequalities experienced by sexual minorities.

Published in Preventive Medicine, the research examined variation in markers of physical and mental health among both sexual minority and heterosexual individuals and was one of the first studies to include data on people who identify as other and those who prefer not to say (PNS), as well as those who identify as gay, lesbian, bisexual or heterosexual. The data was taken from Wave Two and Wave Three (2011–2014) of Understanding Society.

Sexual orientation was asked in the self-completion portion of the study. Markers of health include physical and mental functioning, minor psychological distress, self-rated health, substance use and disability.

One of the report’s authors, Dr Cara Booker from the University of Essex, explains why this research is important. “Few studies from the United Kingdom have fully investigated inequalities between members of different sexual minority groups and heterosexuals over range of health outcomes.
“To our knowledge, this is one of the first studies to include respondents who categorise themselves as other or prefer not to state their sexual orientation. The findings from this study show that these respondents should not simply be excluded when exploring mechanisms that contribute to health inequality among sexual minorities.”

Dr Booker fully explains why this report used Understanding Society data. “A major strength of this study is that it uses national-representative data and that it is able to directly compare socio-demographic and health characteristics between sexual orientation groups. The sexual orientation question is asked in the self-completion portion of Understanding Society which may lead to higher reporting of being a sexual minority than if asked in the face-to-face interview.”

The report suggests “more should be done within the health service to encourage providers and patients to discuss health implications and practices associated with being a sexual minority, specifically among bisexuals. Additionally, service providers should be made aware of the health inequalities associated with non-stated sexual minorities, such as those who prefer not to state their sexual orientation or those who state theirs as other.”