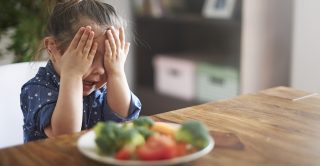 Research findings using data from the University of Bristol’s Children of the 90s study should reassure parents that their fussy toddlers can grow up with a healthy height and weight.

In fact, being more relaxed around eating will help your child be less choosy.

Picky eating in toddlers is a well-documented phase when children don’t want to try new foods and/or show very strong preferences.  It can create much worry for parents, and has created a whole market for advice, guidance and tools to encourage young children to try lots of new tastes and textures.

University of Bristol researchers Dr Caroline Taylor and Dr Pauline Emmett used data from the Children of the 90s longitudinal study to look at the height, weight and body composition of nearly 300 children between the ages of 7 and 17 years who had been found to be picky eaters when they were three years old. The results were compared with 900 children in the same study who were not picky eaters.  In a separate study the same researchers looked at some of the reasons behind fussiness, particularly whether the parents’ concern around the issue contributed towards the development of picky eating behaviour.

Instead of being harmed by their diets, the mean height, weight and body mass index (BMI) of picky eaters were consistently above the 50th centiles of reference growth charts, showing that they grew normally. In addition, more than two-thirds of picky eaters were not underweight at any age point. Overall, the growth of the children who were picky eaters was reassuring.

When looking at the reasons behind fussiness with 6000 questionnaires from the Children of the 90s study, researchers found that the late introduction of lumpy foods (after nine months old) and early parental worry about choosiness were contributing factors for children who were very picky eaters at three years old.

Fifty percent of three-year-olds with mothers who were greatly worried about their child’s choosiness at an earlier age were very picky eaters, compared with only 17 per cent if the mothers were more relaxed at the earlier age.  Parents eating the same meal together with their children was shown to be protective against picky eating.

Dr Caroline Taylor from the University of Bristol’s Centre for Academic Child Health commented: “Parents should be reassured by our research that the fussy toddler they may be faced with today can grow up with a good healthy weight and height, although a few may have periods of skinniness.  Increased worry around feeding can contribute towards young children being pickier about the foods they will accept.

“Advice and support for families should include encouraging the introduction of lumpy foods by 9 months, offering new foods regularly but without pressure, and eating with their children as much as possible.

“Early choosiness is a normal part of growing up and parents can relax in the knowledge that this phase shouldn’t limit their children’s growth.”

“Feeding and nutrition are the most frequently reported concerns of parents with young children. Naturally, parents want to feel confident that their child is growing, eating well and meeting their nutritional needs.  Picky eating is a particular worry to parents who think their child may be missing out on energy and nutrients.

“A wide variety of foods is the ideal way to meet vitamin and mineral requirements but it is possible to have a complete diet based on fewer foods, provided these come from all four of the main food groups.

“These latest studies from Bristol should reassure parents that even though their child may seem picky they are taking in enough energy to support healthy growth. Picky eating is not a new phenomenon and is common in infants and toddlers, so parents should not blame themselves. What we do know now is that lessening parental worry is important to make feeding more enjoyable and less stressful.

“It is recommended to check weight and height at intervals detailed in the Personal Child Health Record (“Red Book”) as we know that good growth is the best indicator that a child is doing well and getting the nutrition they need.

“Provided children are well and have enough energy, not only to grow but to go about their daily activities, including walking, running and active play, there should be no cause for concern.  If there are concerns around growth, low energy levels or a child is frequently unwell then parents and carers should consult their GP or Health Visitor.”

Based at the University of Bristol, Children of the 90s, also known as the Avon Longitudinal Study of Parents and Children (ALSPAC), is a long-term health-research project that enrolled more than 14,000 pregnant women in 1991 and 1992. It has been following the health and development of the parents and their children in detail ever since and is currently recruiting the children and the siblings of the original children into the study. It receives core funding from the Medical Research Council, the Wellcome Trust and the University of Bristol. Find out more at www.childrenofthe90s.ac.uk.