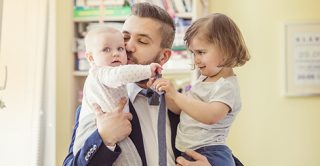 Children whose fathers adjusted well to parenthood and felt confident about their new role may be less likely to have behavioural problems in the run-up to their teens, indicates the 1,500th research paper from Children of the 90s.

It’s how fathers see themselves as parents in the child’s early years, rather than the amount of direct childcare they give, that seems to be important, suggest the findings, which are published today in BMJ Open.

The nature of parenting in a child’s early years is thought to influence their short and long-term wellbeing and mental health, which are in turn linked to how well they develop and do at school.

But it’s not entirely clear what impact the father’s role might have, as much of the research to date has tended to characterise a dad’s involvement in his child’s upbringing as one-dimensional.

The researchers drew on data from Children of the 90s, which has been tracking the health of nearly 14,500 children in the greater Bristol area since birth.

The parents of 10,440 children who were living with both parents at the age of eight months were asked to complete a comprehensive questionnaire about their and their child’s mental health; their attitudes to parenting; time spent on childcare; their child’s behaviour and development; as well as details about household income/education.

When the children were aged nine and 11, their behaviour was assessed using a questionnaire that asked about emotional symptoms, behaviour problems, hyperactivity, peer relationships, and helpfulness.

Fathers’ role in parenting was measured by asking them to rate their level of agreement with 58 statements reflecting the amount of direct childcare they engaged in. These included household chores, their attitudes to parenting, their relationship with their child, and how they felt about the birth eight weeks and eight months afterwards.

Three key factors emerged in relation to the children’s scores: (1) fathers’ emotional response to the baby and their parenting role; (2) how much time the dads spent on direct childcare; and (3) how well they adjusted to their new role, including how confident they felt in their abilities as a parent and partner.

But emotional response and confidence in their new role were most strongly associated with lower odds of behavioural problems when their children reached nine and 11.

A high paternal factor 1 score was associated with 21% and 19% lower odds of a higher score at the ages of 9 and 11, respectively.

Similarly, a high paternal factor 3 score was associated with 28% lower odds of a higher score at both time points.

After taking account of a range of factors, such as age at fatherhood, educational attainment and household income, hours worked and sex of the child, every unit increase in factor 1 scores was associated with 15% lower odds of behavioural problems at the age of 9 and 12% lower odds at the age of 11, compared with kids of the same age, sex, and family background.

This is an observational study so no firm conclusions can be drawn about cause and effect, and, as the researchers note, Children of the 90s started 25 years ago, since when parenting styles may have since changed and the findings may therefore not be as relevant today.

But they write, “The findings of our research suggest that it is psychological and emotional aspects of paternal involvement in a child’s infancy that are most powerful in influencing later child behaviour, and not the amount of time that fathers are engaged in childcare or domestic tasks in the household.”

Charles Opondo et al, ‘Father involvement in early childrearing and behavioural outcomes in their pre-adolescent children: evidence from the ALSPAC UK birth cohort’, BMJ Open, is the 1,500th research paper from Children of the 90s.

Media coverage of this story