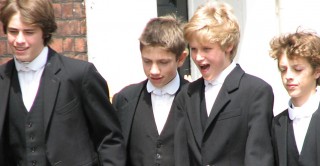 Raising state school children’s aspirations, self-confidence, and improving their access to social networks would do little to counter the huge pay advantages enjoyed by their privately-educated peers, new research shows.

These educational advantages account for the entire private school pay premium for women, and around half of that for men, Professor Francis Green of the UCL Institute of Education will reveal at a research seminar in London on November 12.

Professor Green and his colleagues analysed information on almost 11,000 people born across England, Wales and Scotland whose lives are being followed by the 1970 British Cohort Study.

“Compared with state school pupils in Britain, private school pupils are ‘taught to dream big’, according to many education commentators, and seem to do well because of that,” said Professor Green. “Our findings show that certain attributes, for example, self-confidence and aspirations, and advantages, such as access to social networks, are developed in private schools. However, other important traits, such as self-esteem, are already present in privately-educated pupils as they possess the social advantages and prior cognitive skills that are associated with such qualities.”

“We discovered that although self-confidence and aspirations at age 16 have modest effects on pay at age 42, neither self-esteem nor social networks at 16 are linked to better pay in later life.”

Aspirations, self-confidence, self-esteem and social networks were all assessed when the participants were 10 and 16 years old. Income, based on hourly pay, was measured at age 42.

More than two thirds of 16-year-olds from the top fee-paying schools believed they had a family or social connection that could help to get them a job they aspired to in a managerial or professional occupation. This compared to a third for pupils in other private schools, and only 1 in 6 for state school children.

“Strategies to raise self-esteem, self-confidence and aspirations in the state school sector are unlikely to be very effective in narrowing the pay gap between the private and state sectors in later life. Such policies might seem attractive because they do not have to address the large differences in resources between the sectors.

“Our results suggest that social equality strategies should continue to focus on the considerable educational disadvantages of state school pupils relative to their privately-educated peers. The source of private schools’ advantage remains primarily their ability to deliver better academic performance.

“Policies should therefore remain focused on narrowing the gaps in educational achievement between private and state schools,” Professor Green concludes.

This news item has been reposted from the Centre for Longitudinal Studies website.