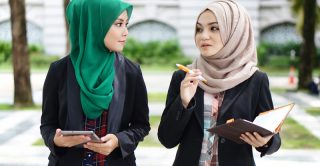 When comparing second generation British ethnic minorities to the first generation, social scientists say they have “enjoyed some small, but significant degrees of social progress.”

In their latest paper Professor Yaojun Li and Professor Anthony Heath have found a significant generational shift for British ethnic minorities, with the first generation experiencing a notable social decline but the second generation having a clear advancement.

The researchers claim this is the first comprehensive study of ethnic social mobility in Britain currently available because in the past data shortage has been a problem.

Therefore, this research was only made possible due to three multi-topic studies; The General Household Study from 1982 to 2005, the British Household Panel Survey (BHPS) for 2005, and the BHPS’s successor, Understanding Society (using the first two waves). Understanding Society has an Immigrant and Ethnic Minority Boost (IEMB) sample which ensures that the study is representative of everybody living in the UK.

“The datasets thus brings us much more up-to-date than the previous studies cited above would do individually and also provides much larger sample sizes. Furthermore, the balance between the first and second generation is much less skewed in our dataset (because of the growth of the second-generation population over time), thus providing a much more powerful test of the theories of generational change.”

With this data, the researchers were able to include all of the major ethnic minority groups to examine the effects of families who don’t work on their children’s mobility chances (a new perspective rarely seen in previous research). They then looked at the mobility patterns and trends for men and women, and for the first and the second generations of each of the ethnic minority groups.

Professor Li said, “Social equality is enshrined in the law and the government has the moral as well as legal responsibility to reduce class and ethnic differences. But class and ethnic (and to some extent gender) differences are stubborn and they do persist as an inherent feature of our market-oriented capitalist society, and that in spite of government policies and efforts by the wider society.

“But we could just imagine what might have occurred if there had been no government interventions in terms of enacting the series of Race Acts since the 1960s, nor the comprehensive school policies allowing children of ethnic minority backgrounds to enjoy the same educational opportunities as the white children, nor the various ‘outreach’ programmes to help the disadvantaged groups to fulfil their educational and career dreams, nor the numerous anti-discrimination regulations in recruitment, training and promotion.

“To be sure, there are still important family class and ethnic factors that impact on people’s socio-economic lives but the positive signs we have seen in the analysis suggest that government policies do have an important role to play in reducing class and ethnic disadvantages. We should not lose hope but must work harder,” said Professor Li.