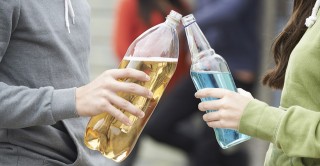 New research has found that children from less well-off families in the UK are more likely to experiment with alcohol while still in primary school than youngsters from more advantaged backgrounds.

Researchers at University College London (UCL) who analysed information provided by 13,000 11-year-olds in the Millennium Cohort Study discovered that those from poorer homes were 50 per cent more likely to have tried an alcoholic drink by the age of 11.

The finding will add to concerns that although underage drinking in the UK has fallen markedly in recent years, health campaigns are failing to reach some sections of the youth population.

The UCL researchers point out that a recent survey by the NatCen social research institute showed that although the proportion of 11 to 15-year-olds who say they have had at least one alcoholic drink fell from 61 per cent to 39 per cent between 2003 and 2013, the number of young people admitted to hospital for alcohol-related reasons (roughly 11,000 per year in the UK) has reduced only slightly.

Young people from disadvantaged areas are at least twice as likely as youngsters in better-off areas to be admitted to hospital for drink-related reasons before the age of 18, according to evidence presented in parliamentary questions on youth drinking in 2013.

The UCL researchers found that 11 per cent of the millennium cohort children from more advantaged households had tried an alcoholic drink, compared to 16 per cent of those from poorer homes.

Children were up to five times more likely to experiment with alcohol if their friends did. Parents’ drinking appeared to have less influence on children, although children whose mothers drank were about twice as likely to report having tried an alcoholic drink.

Only a very small proportion 11-year-olds in the millennium cohort said they had ever had enough alcohol to feel drunk (2% of boys and 1% of girls), but regular heavy drinking becomes more prevalent among teenagers.

Regular and heavy drinking in youth is linked to risky behaviours such as substance abuse and unsafe sexual activity, and with educational failure. Alcohol-related accidents and injuries are among the leading causes of death in young people.

Professor Yvonne Kelly of UCL, who will be speaking about her research at a conference in London today (Tuesday), said: “While public health strategies to curb underage drinking appear to be having an impact, there is may be a stubborn group of young people who are still at risk due to heavy or regular drinking.

“It appears that underage drinking trends are becoming polarised. The children we have looked at in this research were still at primary school when they were surveyed, but even at this young age, we can see differences in drinking habits emerging among different groups.

“Regular heavy drinking is recognised as a major public health problem in terms of early death, and the risk of chronic diseases. The vast majority of people start drinking as teenagers, therefore our findings support the need for interventions that aim to change attitudes to alcohol among young people and their families.”

The Millennium Cohort Study is following children born in the UK between September 2000 and January 2002. The study is managed by the Centre for Longitudinal Studies at the Institute of Education, London. The five surveys of cohort members conducted so far – at ages 9 months and 3, 5, 7 and 11 years – have built up a uniquely detailed portrait of the children of the new century. The study has collected information on diverse aspects of their lives, including behaviour, cognitive development, health, schooling, housing and parents’ employment and education.