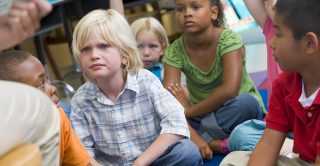 New research into incontinence from Children of the 90s published today in BMJ Open shows that children who wet themselves both during the day and at night are more likely to have bladder and bowel problems in adolescence if left untreated.

These problems can range from lack of bladder control, day- and night-time wetting, an urgent need to urinate, needing to go to the toilet during the night, and having hard stools.

Researchers from the University of Bristol looked at data on urinary incontinence provided by the parents of 8,751 participants in Children of the 90s at least three (and sometimes four or five) different times between the ages of four and nine. They compared these data with information that two thirds (5,899) of the 8,751 participants provided about themselves when they were aged 14.

From the information they gathered when the children were aged between four and nine, the researchers found that almost two thirds of the children (63%) could control their bladder by the time they were four or five but one in 12 (8.6%) couldn’t do this until they were older.

The most striking discovery was that children who wet themselves both during the day and at night had a 23-fold increased risk of bedwetting at age 14. This compares to a three-fold increase of bedwetting in those who only wet the bed in childhood.

Children who wet themselves during the day (but not at night) had a 10-fold increased risk of still having the same condition in adolescence compared to children with normal bladder control. They were also more likely to report delaying going to the toilet and having hard stools.

Children who were older when they achieved bladder control were also more likely to experience bedwetting when they were aged 14.

Speaking about the findings, the lead researcher, Dr Carol Joinson, said, “Urinary incontinence is common in childhood and if not managed properly can seriously affect a child’s quality of life and self-esteem. Most children who wet the bed grow out of it as they age but a significant proportion suffer from incontinence problems well into adolescence and adulthood.

Incontinence gets harder to treat as children grow older. It also becomes more socially unacceptable, which can significantly impact on a person’s quality of life, mental health and ability to hold down a job. There’s lots of professional help available and it’s important to access it in good time.

A “wait and see” approach is not always appropriate and we would encourage parents, teachers and GPs to seek help for affected children. Children and teenagers can also access a range of support materials from ERIC, The Children’s Bowel & Bladder Charity. Researchers at the University of Bristol and I have produced teen-friendly materials for the ERIC website in collaboration with a group of young people.”

Juliette Randall, CEO at ERIC added, “We were delighted to be involved, along with some of our young people in developing the materials for our website. The impact of struggling with continence issues can be devastating for children, teenagers and their families and we hope this research will raise awareness of the issue and encourage more people to seek help and support.

As well as our website we provide confidential support via the ERIC helpline. As well as information, tips and strategies to tackle continence problems our helpline advisers enable people to feel more confident in approaching health professionals.”

The researchers believe that no other study has previously looked at incontinence in such a large, representative group of people at so many stages in their childhood and adolescence.