Home  >  News  >  Women of different ethnicities enter and exit the UK workforce because of many factors, not just cultural difference 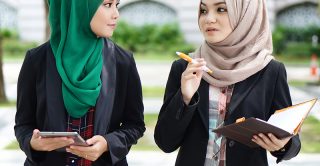 A study of women’s working patterns shows that cultural differences should not be overemphasised to explain why women join and leave the workplace.

Understanding Society has a boost sample of over 6,000 adults from ethnic minority backgrounds.

The new research by Professor Lucinda Platt from the London School of Economics (LSE) and Yassine Khoudja from the Centre of Research and Analysis of Migration at University College London used the first four waves of Understanding Society to look at what factors can affect women of different ethnicities entering and exiting the workplace in the UK.

Previous studies have attempted to explain ‘ethnic differences’ in women’s working patterns by examining women’s education, language skills, household conditions and endorsement of traditional gender role attitudes. However, most of these studies used a cross-sectional design, meaning that they only looked at the labour market status of women at one point in time.

Yassine Khoudja said: “Our approach gives an insight into whether there are similar (or different) patterns of labour market entries and exits behind similar labour market participation rates. Moreover, it allows us to connect life-course events such as giving birth and changes in the partner’s income more directly to labour market transitions of women than in a cross-sectional study. Finally, our study also examined the role of gender ideology for explaining ethnic differences in women’s labour market transitions, which has rarely been done in earlier research.”

Why was Understanding Society used for this research?

Yassine Khoudja said: “Our study shows that changes in the household conditions of women (i.e. entering or leaving a partnership, an income change of the partner, and motherhood) play an important role in explaining ethnic differences in women’s labour force transitions. Therefore we recommend policy makers improve the reconciliation of work and family, for example by providing easier and cheaper access to childcare, but also by creating policies that facilitate flexible work hours.”

‘Labour market entries and exits of women from different origin countries in the UK’ by Yassine Khoudja and Lucinda Platt was published on the LSE website in August 2016.